Summary: Comparison of the two main types of birth-chart format used in Jyotish – North Indian and South Indian, with suggested modifications for students of Jyotish

Most Western Astrologers use a circular format birth-chart, but this is not used in Jyotish.

There are two main types of chart formats used in Vedic Astrology – the North Indian and the South Indian system. This often causes confusion to those new to the subject as the charts seem completely different. However, each format is just a different way of representing the same information.

The ‘diamond’ type grid is mainly used in North India and the ‘rectangular grid’ type of chart  in South India. Both charts in the diagram below represent exactly the same astrological data. In the North Indian system the ascending sign is always placed in the ‘top diamond’ box and the signs are often numbered 1 to 12, i.e. Aries to Pisces. For the horoscope shown the ascendant is in the 12th sign Pisces, with both Jupiter and Venus in the ascending sign, Rahu in the 4th sign Cancer (corresponding with the 5th house in this chart), etc. 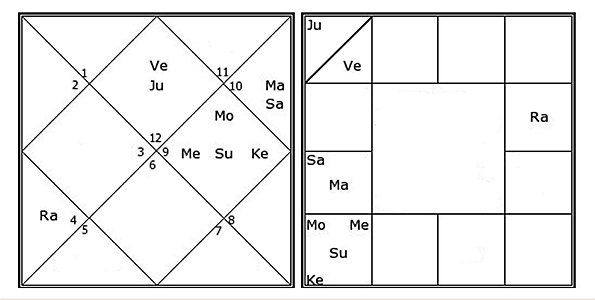 Signs in Jyotish have exactly the same names as those in Western Astrology (e.g. Aries, Taurus, etc.) – but their position in the sky is different from the position of the Western Astrological signs. This is because Vedic Astrology references the signs to the background of the fixed stars in the sky – so it uses the Sidereal Zodiac and not the Tropical one used in the West. Currently there is approximately a 24 degree difference between the two zodiacs (the tropical zodiac uses the spring equinox point as a ‘zero’ reference for the start of Aries and this moves against the background of the fixed stars due to the precession of the equinoxes.)

If we are just beginning the study of Jyotish I believe a slightly modified form of the rectangular South Indian chart format is much easier for Westerners to use (see the diagram at the end of this article).

The ascendant is shown by a single diagonal line in the appropriate sign on the chart – regardless of the angle of the ascendant (e.g an ascendant of 1 degree Leo or 29 degrees Leo is still shown in exactly the same way) 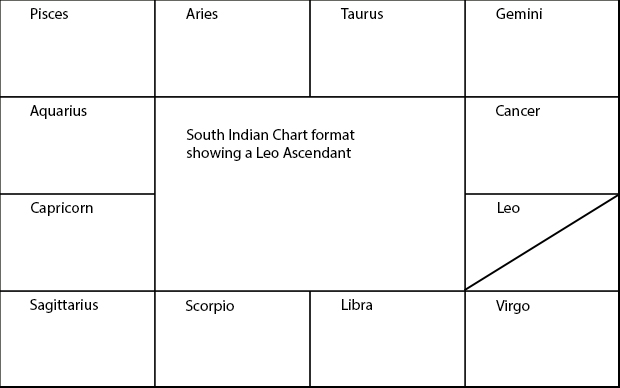 To help students access and process a lot of information I have added extra compartments to each of the rectangles. This enables us to put in additional, important and at-a-glance information such as the house number (counting clockwise from the ascending sign), in which house the sign ruler is placed, planetary aspects to the house and what the house number would be if the moon was used as an ascendant. This modification is particularly helpful when learning Jyotish. 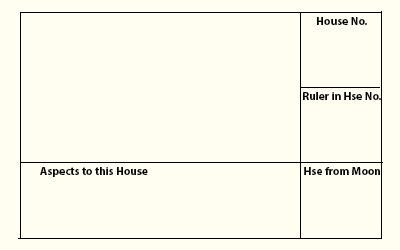